The Sant Joan de Déu Hospital in Barcelona is an internationally prestigious Spanish university hospital specialized in pediatrics, gynecology and obstetrics. It is a private non-profit institution, with a vocation for public service that belongs to the Hospitaller Order of Sant Joan de Déu.

Heal and care, these two simple words are all that is needed to define the Sant Joan de Déu Barcelona Hospital. 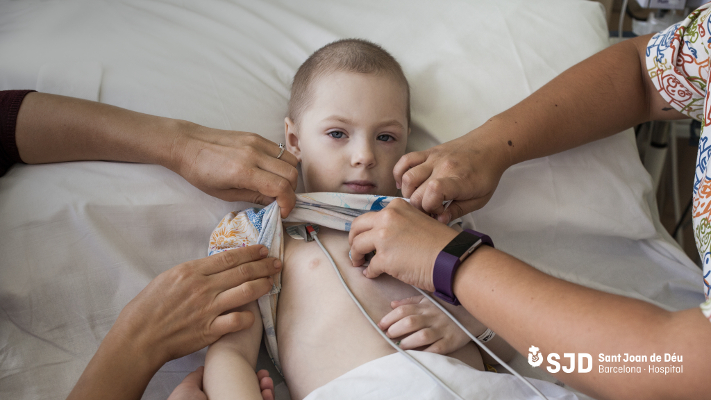 “Without Stockcrowd we could never have hoped to raise 30 million euros for the construction of the SJD Pediatric Cancer Center Barcelona. Versatility, easy access to data, quick handling of donor data, automated processes that make management so much easier... a whole series of technical advantages that make all the difference to a crowdfunding campaign.”

The Sant Joan de Déu Hospital in Barcelona is an internationally prestigious Spanish university hospital specialized in pediatrics, gynecology and obstetrics. Two years ago, the construction of the SJD Pediatric Cancer Center was proposed: the largest childhood cancer center in Europe.

“We had always dreamed of the possibility of using a platform like Stockcrowd's, but we never knew that it existed. Learning that such a platform did indeed exist came as a great surprise to us while we were preparing the #ForTheBrave campaign at the end of 2016, says Mariana Romero, head of Fundraising and Communication at the Hospital.”

In order to build it, the HSJD wanted any person who felt a close, personal connection to a cause to be able to get involved and to contribute through a crowdfunding campaign with the aim of raising 30 million euros.

A super ambitious goal that needed a very complete tool that provided versatility, simplicity and that was completely configurable.

The HSJD has managed to raise more than 28.121.000€ Euros from more than 12,000 people through the StockCrowd tool, a milestone in the crowdfunding world in Spain.

Having a life of its own and a private space for employees, the www.paralosvalientes.com campaign has enticed important companies to join the project, raising more than 14 million Euros from several companies.

Control of my donors base

Unlike most platforms, our customers' donor base always belongs to the organization. This was one of the reasons why the Hospital decided to work with StockCrowd.

“Mainly, the StockCrowd software has solved something we had always wanted: to have access to the data of our donors in a private and simple way. With StockCrowd we have total control over our donor database,” says Mariana.

A campaign of such size needed the maximum customization level to be able to capture the campaign's real identity, as Mariana Romero told us.

“Until now, we hadn't had the possibility of adapting our image, style and brand to the campaigns we had launched. StockCrowd makes it possible for us to show everything we want to society in order to make donating as attractive as possible”.

An intuitive tool. An excellent service

As with any new software, the Hospital team took a little while to adapt to the new tool.

“But really, if you're used to working and posting on websites, the tool is very easy to use,” Mariana says.

Also, at StockCrowd we have a deep understanding that we are a SaaS (Software as a Service), so the service we provide to our customers is just as important as our technology. According to Mariana,

“What we like most about StockCrowd is the close, highly personal relationship we have with their customer service and their flexibility when it comes to finding the best solution for you.”

From StockCrowd we launched a peer-to-peer feature just a few weeks ago. Through this tool, we empower the organization's community so that it can launch its own fundraising campaigns to support the cause.

This tool has a Marketplace through which the fundraisers of the organization can see the biggest and most recent fundraisers to encourage competition between them. The HSJD did not hesitate to integrate it into ForTheBrave when we talked about it, as Mariana tells us

“The feature that we like the most is the p2p Marketplace, with which you really energize the community that is supporting you and encourage more people to raise funds for the cause. ”

Regarding the question of whether she would recommend the StockCrowd software to other organizations Mariana tells us,

“We have already done it! Because it provides easy solutions and brings results to the needs of the entities that need to receive donations.”